All along the eastern coast it has been snowy and bitter cold lately. It usually isn’t this cold until January and with the cold brings everyone indoors looking for ways to keep warm. My way of keeping warm is soup, homemade soup that is. Throw out the cans and learn how to make your own healthy leftover thanksgiving turkey soup!

Years ago when I first started reading The Tightwad Gazette I found a recipe for turkey soup in it and I made it for my husband and his father for lunch one time. They had been hunting and I had to come up with something to warm them up, so they had soup and sandwiches. Since then I have made this and everyone seems to enjoy it, so it remains a dish that I will make when I have a carcass. Here is a tip when making soup, add vinegar to the water and it will draw the calcium out of the bones of the carcass. One ounce of vinegar to one quart of water, up to four ounces total of vinegar no matter how much water you use.

You won’t taste the vinegar in the soup once it is cooked.

Cover your carcass with water and four chicken bouillon cubes or four tsp of granulated bouillon, one tsp parsley flakes, one tsp pepper and salt to taste. You will want to add the vinegar now as well. Simmer for 45 minutes. Strain broth and pick meat from the bones. Return meat to the broth and add two celery ribs chopped, three carrots diced, one medium onion chopped, and two potatoes chopped. Cook until tender. Then add one cup of noodles and one can of peas, or a cup of frozen peas. Simmer until noodles are tender. 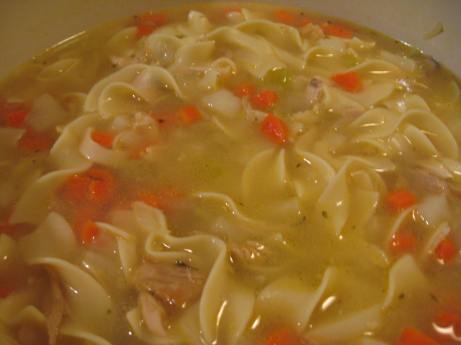 I don’t have any peas in my soup yet in this picture. I usually add the noodles when I throw in the veggies and have never had a problem.

This makes a hearty meal when served with homemade bread. 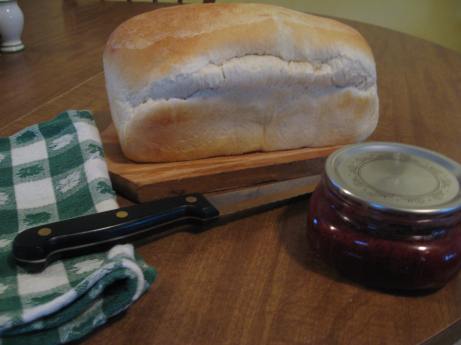 I had some frozen dough that I had bought on sale back in October and I wanted to use it up so that will be served with the soup. Some home canned strawberry jam spread on top will be really tasty!

I always think of Laura Ingalls Wilder when she wrote about the Long Winter. It was so cold that they huddled around the woodstove to keep warm and there was the smell of  beans boiling on the stove. Ma strained the beans from the broth and they ate warm broth with homemade bread for their meal. A simple yet humble meal that warmed there bodies from the cold outside that seeped through the walls of their home.

Our woodstove is on but we aren’t huddled around it eating our soup. It is hunting season so hubby does come in sometimes to warm his hands by it when he has been out hunting, so I guess that makes us a little like the “Little House” series, right?